Together with his parents, Richard Schutte built up a successful business of 4 interior decoration shops. A few years later in 1987 he decided, with the support of his wife Ellen Steentjes, to start his own wholesale business.

Initially they sold their collections exclusively in the Netherlands but soon decided to expand their business which now spans the globe. They started creating their own collections under a new brand name: Chivasso. In 1991 the first collections were launched under the name Chivasso. By 1995 their collection was large enough to show at the Heimtextil in Frankfurt, Germany. 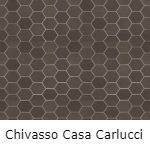